“Paul (Paulie) Herman was one of the greatest guys of all time,” Danza wrote.

“A great actor and a great friend. If you visited NYC from LA, he was the entertainment director. We will all miss you so much, Paulie.” 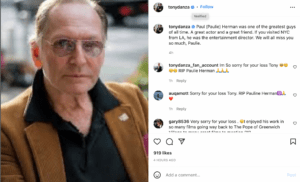 He also appeared in the following films:

Herman is perhaps best known to Sopranos fans for his recurring role as Peter “Beansie” Gaeta.

Beansie was a Sopranos family associate and a member of the Aprile crew.

He immediately seeks out Beansie to extort money from him.

Aprile, played by David Proval, walked into Beansie’s Elizabeth pizza parlor and indignantly berated Beansie for apparently failing to visit him while he was in the can.

“10 years – and not even a pleasant ‘Go fuck yourself’ from you I get,” Richie said. 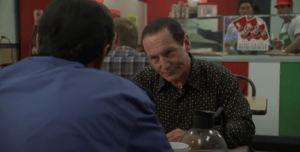 Beansie subsequently grabbed the attention of one of the young male servers and instructed him to bring his old friend “a nice veal parm sandwich” and to “hurry the fuck up about it.”

Richie reminded Beansie that he put Beansie “in action” and that he’d be back every Saturday to collect money from him.

“I’m being shaken down for what? What did I do? Tell me, what did I do?” Beansie asked Richie.

Beansie told Richie he wasn’t “going to lay down” and that he’d step up to Richie, presumably under the protection of Tony Soprano, with whom he was friends.

An infuriated Richie smashed a pot of hot coffee over Beansie’s head and severely beat him in the middle of the pizza parlor for all to watch.

Later on, Richie ran over Beansie with his car, leaving Beansie severely injured and hospitalized.

Richie’s attempted murder of Beansie left Beasnie a paraplegic and permanently confined to a wheelchair. 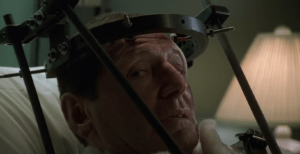 Beansie Gaeta began his association with the DiMeo crime family as a low-level drug dealer.

He matured under the guidance of DiMeo capo Richie Aprile and was eventually promoted to running a successful heroin trafficking operation during Jackie Aprile’s tenure as acting boss during the ’80s.

In the early ’90s, according to the website Sopranos Fandom, “Richie Aprile was arrested and sentenced to a 10-year prison term (possibly for the heroin dealing he conducted with Beansie).”

Beansie eventually left New Jersey with his wife Gia Gaeta, played by actress Donna Smythe, and relocated to Miami, where he opened a supper club.

In season six, Tony secured a job for his son, AJ Soprano, played by Robert Iler, at one of Beansie’s New Jersey pizza parlors, where AJ eventually became the manager.

About the Glorified Crew Sopranos Blog

Follow the Glorified Crew Sopranos blog for the latest Sopranos commentary, memes, show analysis,  trivia, and so much more!